The weather is getting cooler, and the leaves are changing color. The holiday season is right around the corner! Whether you celebrate Thanksgiving or Christmas, pumpkin pie is a must-have on your table this time of year, and this is the only Pumpkin Pie Spice you will need.

Look no further if you want to make an amazing pumpkin pie this holiday season! Just start with the right food with this DIY pumpkin pie spice!

This is the best homemade pumpkin pie spice recipe that will take your home-baked goodies from ordinary to extraordinary.

🤔 What is in Pumpkin Pie Spice?

Pumpkin pie spices are a blend of different spices, including ground ginger, ground cinnamon, and nutmeg are the most common ingredients in many recipes for pumpkin pie spice, but there can be some variations. Depending on which seasonings they have on hand, some people may also add allspice into their spices mix, and ground cloves.

We are making a 4 ingredient spice mix, using cinnamon and ginger as the predominant flavors, followed by nutmeg and cloves.

The first pumpkin pie spice recipe was published in American cookbooks around 1900. The mixture likely evolved from earlier recipes for pumpkin pie that called for a long list of spices to flavor the dish, including things like ginger, cloves, and nutmeg.

Although it was essentially a shortcut to improve the flavor of pumpkin pies, it soon became a popular spice blend in its own right.

Thanks to its popularity and simplicity, it is easy to find this famous mix in the grocery store. However, there are many reasons why you might want to try making your pumpkin pie spice from scratch!

For example, freshly made spice blends have a more potent flavor than store-bought. In fact, making your own pumpkin pie spice blend can be cheaper than buying a small jar at the local grocery store. Many people love to give homemade food items as Christmas gifts, especially if they are easy to make in large batches.

Also, the prep time is minimal, as you only need to put the right proportion of ingredients together and store them in an airtight container.

Curious about cooking with pumpkin? It is super easy!

You need only common spices. The only ingredient that might be more difficult to get is allspice, which we exclude as we don't think is required, and pumpkin spice blends usually consist of only these ingredients.

Other spices: optionally, you can add a pinch of ground allspice.

*all the spices should be ground spices. If you don't have a spice grinder use a coffee grinder or a blender. You can use this for all kinds of baked goods. Happy Holiday baking!

Hint: we don't recommend grinding cloves, as they have a resin that will irreversibly stain your grinder machine's plastic or acrylic.

You can even use it in savory dishes like Pumpkin hummus.

If you want to stock on it (as we normally do), multiply the amounts by how much pumpkin pie spice you want. There is a multiplier function below in the recipe card.

Combine all the ingredients in a small bowl to create your own pumpkin pie spice mix. Store it in an airtight container to keep it fresh for as long as it lasts.

Hint: we use pumpkin pie spice often during the fall and holidays season, so we prefer making a big batch of the best pumpkin pie spice to save time while making recipes that call for the same individual spices, which is very common. We love using it as a replacement for cinnamon on our unsweetened applesauce, to give it a more interesting twist.

Take a look at our Vegan No-Roll Pie Crust.

To keep the spices fresh between uses, store them in a sealed container away from direct sunlight and heat. If you plan on using pumpkin pie spice regularly, consider making large batches of the whole or part of the pumpkin pies spice recipe to save time.

Now that you know how to make this easy recipe (and more about spices) go ahead and make this for your next pumpkin pie!

The obvious recipe for using your homemade pumpkin pie spice is the Vegan Pumpkin Pie bake. Still, there are lattes, overnight oatmeal, breads, spinach smoothies, and warm dishes like a Sweet Potato Crunch casserole. The list is never-ending, as the flavors present in pumpkin spices are very common on several Fall and Holiday dishes.

We like eating our Holiday Season pumpkin pie with some coconut whipped cream and sprinkle pumpkin pie spice on top.

It's a popular ingredient for fall wintersweet treats, including pumpkin pie, and works great in other dishes.

Spices add flavor and variety to food, but they also offer additional health benefits. Many spices can reduce the risk of certain diseases and conditions. Some possible ways in which spices may affect your health include:

Cinnamon is one of the most popular spices out there. It contains powerful antioxidants called polyphenols that help reduce inflammation in the body.

Cinnamon also has anti-clotting effects, improving circulation and protecting against some cardiovascular problems.

Many studies have found the benefits of cinnamon on blood sugar control in people with diabetes. However, some people find that cinnamon can cause a spike in blood sugar levels, especially diabetics and those sensitive to blood sugar fluctuations.

Ginger is one of the most versatile spices. It has powerful anti-inflammatory effects that help fight flu symptoms, reduce arthritis pain and lower cholesterol. The active compounds in ginger are thought to have significant antiemetic properties, meaning they can suppress nausea and vomiting.

Some studies have shown ginger to be just as effective as medication when controlling nausea or vomiting after surgery.

Nutmeg is a popular baking spice. It is high in manganese, fiber, and vitamin C, all essential for health. For example, the body needs manganese for blood clotting and building bones.

Since nutmeg is high in fiber, it can help relieve constipation. Many studies have focused on the benefits of nutmeg for memory improvement and Alzheimer's disease prevention.

Cloves are used to season foods but also have some medicinal properties. They contain eugenol, a compound that acts as an antiseptic and has anti-inflammatory properties. Cloves also contain antioxidants that can reduce inflammation throughout the body. Recent studies have found that cloves might lower blood pressure, fight cancer cells and relieve pain.

Ask for a cup of coffee with pumpkin pie spices syrup instead of regular maple syrup to save 120 calories and 18 grams of sugar per serving!

It is easy to make your spice mix at home; instead of buying pre-made pumpkin mixes, you can store them for months and use them in many dishes, from breakfast and beverages to the most decadent and festive holiday desserts. 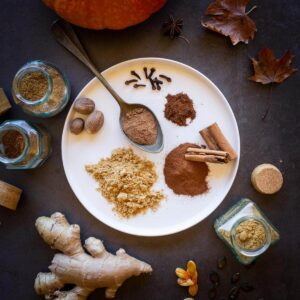