Ceviche is one of our Latin staple foods and has as many variations as countries in Latin America. Have you tried a Vegan Ceviche recipe yet? You will be surprised how close the delicious flavor is to the raw fish-based one.

🤔 What is a ceviche (cebiche)?

Ceviche has its origins in Latin America. The most widely known version is Peruvian, but the reality is that Ecuador, Mexico, Panama, Colombia, and other Central American countries also have long-standing versions. We all have our traditional varieties.

Ceviche is a seafood dish traditionally made of diced cubes of raw fish cooked in lime juice (or lemon juice), red onion, and fresh cilantro. It makes a great appetizer as the citrus juice, and the intense flavors are the perfect gluten-free starters for a delicious meal.

As you explore ceviche’s versions, you’ll see that the variations come from the kind of onion used, the type of fish or seafood, the addition of hot chili peppers, the use of herbs like cilantro, and even garnishing it with sweet potatoes and/or corn.

It is the perfect summer season appetizer!

🧾 How to make a vegetable ceviche

We are making a vegan alternative that will change your look at ceviche.

This vegan recipe changes the fish component of the ceviche and replaces it with three kinds of vegetables:

These veggies have a great texture that will make up for the silky texture of fish or shrimp once marinated.

You need to add the must-have ingredients for this plant-based recipe: lime and onions because the vegetables will “cook” in lime juice.

Finally, top it with your choice of garnishes such as sweet potato, fresh cilantro leaves, and toasted or boiled corn kernels.

This is already a free version of ceviche, so please add or take any veggies that you consider appropriate. These three are my favorite mix, and I have made it for years.

I learned how to make the basic veggie ceviche recipe while I lived in Argentina. My Panamanian Yogi friend Jermaine (also the founder of Ayurveda Lifestyle), who grew in the Coast Side in Colón, showed me how they made this veggie ceviche while not even trying to make a vegan version.

A vegan version traditionally existed in his province. I was immediately surprised by how close the veggie version was to the fish version, and at that time, I was still eating fish.

I realized that most of the flavor in ceviche came from the “cooking” method. Soaking produce in lime juice and onions.

From that moment, I included it in my kitchen as an option when craving ceviche and didn’t have access to fresh fish. Now, of course, it is my go-to version.

Thinly slice the red onion. If you have a mandolin, use it, but it is not essential.

Rub the onion slices with ½ tablespoon of salt and rinse in cold water.

In medium-sized pieces, chop and thinly slice the cucumber, radish, zucchini, and any other vegetable you choose.

Juice the limes or lemons.

Place the cucumbers, radishes, zucchini, half of the chopped cilantro leaves, and hot peppers (optional) in a large mixing bowl and pour the lime juice over the ingredients.

Sprinkle with salt. To minimize the acidity of the limes, you can add a couple of ice cubes.

Cover with plastic wrap and refrigerate for about 1-2 hours.

If garnishing with sweet potato, cut it in half and put them to boil, or steam.

Taste any veggies and add additional salt if needed.

We like to serve this vegan ceviche recipe on a serving plate in individual small bowls. Top the ceviche with the remaining freshly chopped cilantro.

Make sure you serve it with salted crackers, lettuce cups, tortilla chips, or nachos. You need something to scoop the goodness! 🙂

You can serve this ceviche as an appetizer as we do with our chickpea avocado salad on top of yellow corn tortilla chips.

Of course, this is a re-interpretation of the popular side dish, so there are no right or wrongs here, feel free to change and adjust. Here are a couple of suggestions that we have tried and think go perfectly well when you need to change or replace ingredients you might not have handy or available in your grocery store.

You can use garbanzo beans or black beans instead.

You can replace zucchini with hearts of palms, a widely known option for making a vegetarian ceviche recipe, which is quite a popular version; our version includes some garbanzo beans for extra protein.

You can choose orange bell pepper if you are not into spicy food.

You can go for avocado if you want something silky, soft, and delicious. Mexican ceviche is almost always served with avocado. And who doesn't love avocado? We all know it goes great with lime juice and onion, as in a perfect traditional guacamole recipe.

If you can't find cilantro, don't worry. Many people don't appreciate it anyway, but if you live in Central America or Colombia, you might discover Culantro, also known as cimarron, replacing cilantro in this recipe. Otherwise, some chopped parsley can be a good addition, although the flavor profile is not close.

Cauliflower also makes a great addition to any vegan ceviche, and it pairs well and tastes delicious.

We like serving our ceviche with crackers, baked tortilla chips, patacones, or little flour baskets.

You can use lettuce cups; simply rip some small-sized lettuce leaves, which will be great and make everything less messy while eating.

Store your leftover ceviche using an airtight container or plastic wrap, and consume within two days.

This vegan ceviche recipe is not freezer-friendly! The texture of the veggies would be affected.

As you can imagine, having so many variables, you can have many different results. For example, in Latin America, we share many of our heritage foods, so it is widespread to see this phenomenon in many staple dishes such as tamales, arepas, tostones (patacones), etc.

Each culture adds its touch based on the produce cultivated and local fish. And usually, nobody is fighting over the dishes’ origins. So, any discussion on that topic would be controversial and useless.

There is a close cousin to ceviche: the Tiradito.

What is the difference? It is about the same as everything described above, seafood cuts cooked in lime. The only difference is how the main ingredients are cut and the use of onions.

Tiradito is a finely sliced fish cut cooked with lime with no onions.

So, why am I introducing you to Tiraditos anyway?

Because our Vegan Ceviche is a mix of the ceviche and the Tiradito techniques, using lime as the common ground.

We take both the slicing style from the Tiraditos, the onions from the ceviche, and the lime-cooked method. Voilà!

The leftover juice of the ceviche is known as Leche de Tigre (Tiger’s Milk). It is usually served in a small glass and is believed to cure a hangover and have aphrodisiac effects (hence its name).

This drink is sometimes served in restaurants and the ceviche and taken with pisco or a beer.

It is called Leche de Tigre; when consumed as an aphrodisiac, this drink is supposed to unleash the inner tiger of a man in bed.

I suppose it is because it traditionally comes from seafood (which supposedly enhances libido). But, of course, it is not the case in this vegetarian ceviche recipe. So we drink it anyway as it is equally delicious and packed with one of the most potent antioxidants, Vitamin C.

Leche de Tigre usually has the color of lime juice. Here you see a pinkish color coming from the dyeing of radishes.

If you love zucchini dishes, give this Lebanese-style stuffed zucchini a try; you will love them. We also use them to make lemony zucchini risotto and yellow Thai curry; they are perfect because they can absorb tons of flavor. 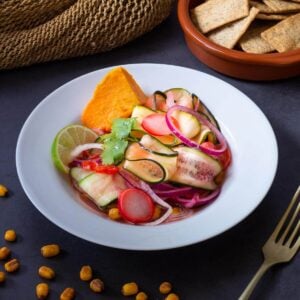 Gus
Ceviche is one of our Latin staple foods and has as many variations as countries in Latin America. Have you tried a Vegan Ceviche version yet? You will be surprised how close the flavor is to the fish-based one.
5 from 30 votes
Print Recipe Pin Recipe
Prep Time 15 mins
Resting Time 1 hr
Total Time 1 hr 15 mins
Course Appetizer, Snack
Cuisine Healthy, Latin American
Servings 6 Servings
Calories 73 kcal