Golden milk is a delicious, nourishing drink that many people enjoy. But what if you're vegan? never fear, because a vegan golden milk recipe is just as easy to make! This recipe is perfect for chilly winter nights when you need something warm and comforting. Plus, it's loaded with antioxidants and other beneficial nutrients. So why not give it a try?

Golden milk, Latte Oro— also known as Turmeric Milk —is a traditional Ayurvedic Indian drink. It can be as simple as mixing milk and ground turmeric.

Making plant-based versions of our favorite foods is our goal. We are also fans of all the vegetable kinds of milk; we changed the traditional golden milk recipe's cow's milk for rice milk and added a few aromatic ingredients.

Generally, we have golden milk a couple of times a week to replace our morning plant-based late coffee. And we love having it with a portion of gluten-free cornbread.

The golden milk's health benefits vary from overall body healing to its anti-inflammatory properties, primarily thanks to the curcumin found in turmeric and the ginger we add in this version and the ginger.

Drink turmeric milk to reduce inflammation or as a way to maintain overall health. Make golden milk regularly if you suffer from joint pain or arthritis.

Turmeric has been used in Ayurvedic medicine for thousands of years to treat joint pain, fatigue, and digestive issues, amongst other conditions.

A good example is its use in the Vegan Kitchari Cleanse Ayurvedic recipe, a 1-pot hassle-free main dish that works perfectly when you want to give your gut and stomach some rest.

Modern research also suggests that turmeric is a potent antioxidant, heart disease-fighting, and has anti-cancer effects.

See how to make a lemon and ginger an anti-inflammatory morning infusion.

Although the traditional golden milk recipe calls for dairy milk since cow's milk has been associated with different forms of cancer and an increasingly high percentage of the population has become lactose intolerant, why not try a non-dairy milk version using beverages such as nut milk?

The active ingredient and most benefits from this traditional Indian drink come from turmeric and the other spices included in this delicious and nurturing drink.

Spices like ginger, ground cinnamon, and cloves have anti-inflammatory and anti-cancer benefits.

Please have a look at our Hangover Juice recipe or this great detox juice recipe for more cleansing and health-promoting drinks.

Sweetener (homemade date paste, agave, or maple syrup). You can use coconut sugar or brown sugar, but sugar, in general, promotes inflammation.

It would be counterintuitive; if you want to benefit from the benefits of this traditional ayurvedic drink.

Making this vegan golden milk recipe is easy and doesn't take more than a couple of minutes.

In a small saucepan, set your dairy-free milk to simmer over medium heat, and then add the ground turmeric, black pepper, grated fresh ginger root.

Start to whisk to combine all the ingredients. Heat until hot to the touch but not boiling – it should take about 3-4 minutes – stirring frequently with a whisk or wooden spoon.

Turn off heat and taste to adjust the flavor. Add more maple syrup or ginger for a more intense flavor.

If you used solid ingredients like a cinnamon stick, fresh turmeric root, or cardamom pods, optionally pass your golden milk through a colander.

I like to serve my golden milk hot immediately, but sometimes I make it in batches and like to drink it cold. As if it were a smoothie, I love golden milk that way as well.

Remove the cream that may have formed on top.

This Ayurvedic medicine Golden milk feels more nurturing when fresh, but it can be stored covered in the fridge for 2-3 days. Reheat on the stovetop until hot.

Use it if you are out of time and have some store-bought or homemade pumpkin pie spice mix! It is an excellent option to make this fantastic drink faster.

The recipe shares various essential ingredients, thus, both the flavor and health benefits you can expect are similar. You will still need the turmeric and black pepper though.

An additional flavor that pairs very well with this delicious drink. Just add a couple of drops.

You can use either a paste of fresh turmeric root instead of ground turmeric powder.

You can use a whole cinnamon stick instead of ground cinnamon and add it to the simmering saucepan, just remove it before serving.

User powdered ginger if you don't have fresh ginger handy.

Any dairy-free milk works perfectly for this recipe. In my experience soy milk, almond milk, and cashew milk are the creamier.

Although it works, I have noted that when simmering it, it becomes very slimy, so although I love oat milk and use it extensively in my recipes, I don't recommend it for this recipe or any recipe that requires milk to be simmered or boiled.

This is s a great option as well, but it is not neutral and will add a distinctive flavor note to your golden milk. If you like coconut milk as we do, go for it!

If you decide to use coconut milk, don't use full-fat coconut milk; remember it is packed with saturated fats that are not necessarily healthy.

Some people like adding a teaspoon of coconut oil to their turmeric milk. I don't like it personally, as I like to keep my golden milk fat-free; I'd rather use coconut milk, but it is certainly an option if you like to add this flavor note. Keep in mind that coconut oil is saturated fat and is not heart-healthy.

🌙 4 Benefits of Turmeric Milk at Night

Drinking Latte d'Oro - as it is called Italy - can improve hormonal balance. It can be helpful as a remedy for acne and unpredictable periods.

Drinking one cup of Turmeric milk at night can be beneficial for people who get restless during sleep. Also, if your rest breaks multiples times to use the bathroom in the middle of the night, you can benefit from Golden Milk.

Turmeric can boost immunity. Drinking golden milk during season changes can protect you and your family from cough, cold, and flu.

Read on: Drinks to boost the immune system »

Curcumin has antibacterial and anti-inflammatory properties, which do help in combatting acne and clarifying the complexion.

We know that the skin is more prompt to get blackheads and acne when its pores are blocked by oil, dead skin, and external pollutants; drinking turmeric milk for the skin can help prevent acne.

Below you can find our vegan golden milk recipe, perfected over time as we played with various delightful Indian spices.

The Leche de Cúrcuma or Leche Dorada, as it is called in Latin America, is a remarkably delicious beverage with great health benefits.

We made part of our Christmas morning breakfast this past December with a Vegan Apple Cake. This Vegan Golden Milk is a very soul-warming drink.

At night - if you are using golden milk to benefit from its insomnia-fighting properties. Have it thirty minutes before going to bed.

I think it is like drinking hot chocolate but healthier.

We spiced it a little more to make it more festive. It goes perfectly with all the aromas of a Homemade Delicious Granola.

If you’re looking for some simple ways to get more vitamin D during the winter months, this recipe is one of our favorites.

It only takes about 10 minutes and tastes delicious too! Make yourself a cup of vegan golden milk by combining these ingredients in a small saucepan.

We hope you enjoy it as much as we do!

Beetroot and Celery Juice: the pre and post Workout Juice 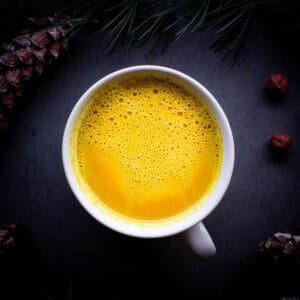