Although we love making buttermilk cornbread with bean chili year long because cornbread batter is made in one bowl and is mysteriously easy to bake, it is not until the Fall season that we start making this vegan cranberry cornbread because it pairs beautifully with sage butter, making it the dreamed Autumn delight!

This egg-free cornbread dressing goes perfectly on any Thanksgiving or Christmas holiday table, served with a kale salad with maple-balsamic dressing and glazed tofu steaks.

Make this gluten-free cornbread stuffing with just a few kitchen staples, and make them shine with pure comfort food flavors.

See the recipe card for quantities.

To make this vegan cornbread stuffing, you just need to sautee a couple of fresh veggies: bake them with the cornbread dice, and add the final touch by tossing some cranberries and chopped pecans.

Hint: make gluten-free cornbread a day ahead if you want to save some time for the Thanksgiving meal.

Sautee diced onion and celery in butter on medium heat on a large skillet.

Use nonstick cooking spray and arrange cornbread cubes on a baking sheet.

Add the cooked vegetables on top.

Remove the foil, and broil for another 5 minutes until golden brown. Lightly toast the pecans on a skillet.

Toss the lightly toasted pecan nuts and garnish with fresh herbs in a casserole dish. Stir to combine.

Serve on any Holiday meal with a fresh kale salad, and roasted Brussels sprouts as side dishes for a delicious nut roast with mushroom gravy, and vegan mashed potatoes.

See this spicy version of this recipe on my website! (placeholder for in-content link)

To make your gluten-free cornbread stuffing, you will need a baking dish for the bread and a rimmed baking sheet to bake the stuffing.

To mix the liquid ingredients, you can use a large bowl and a whisk: then pour the mixture over the cubed cornbread. Optionally cover with foil, so the flavors meld more evenly.

Store the vegan cornbread stuffing using an airtight container in the fridge for 3-4 days. Sprinkle almond milk or vegetable broth before reheating to prevent it from drying out. Add some freshly toasted pecans before serving.

This gluten-free cornbread stuffing can be frozen, but I recommend not thawing completely and baking in the oven while frozen, so it doesn't become mushy.

To make the stuffing ahead, do everything and save some melted butter to toss right before serving.

We like having different textures, so we cut the dried cornbread cubes into different sizes. If you think it is too chunky, you can break the bigger dice with the back of the wooden spoon when plating.

Give a good stir to the vegan cornbread dressing right before serving.

Don't forget to pair this add unsweetened homemade apple sauce and the most delicious pumpkin pie to make a memorable banquet.

How do you make gluten-free cornbread stuffing?

You just need to make cornbread using a store-bought gluten-free mix or make it yourself within minutes.

Is there any vegan stuffing?

Yes. Cornbread stuffing and mushroom-based stuffings are amongst the most popular vegan stuffing options.

How do you keep cornbread dressing from being gummy?

Right before serving, put in a preheated oven and broil for 3-5 minutes depending on how much moisture there is. This will evaporate the humidity and make the cornbread crunchier.

⭐ If you try this gluten-free stuffing recipe, let us know! 💬 Leave a comment, rate it, and don't forget to tag us @ourplantbasedworld on Instagram. Cheers! 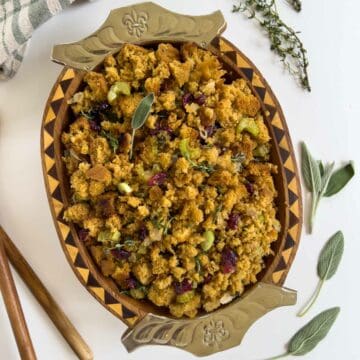